Sharks and rays pass through the Palma fish market every day. However, to prevent certain protected species from being commercialized, three marine biologists with a long history in the Balearic fishing sector are leading a study to detect the presence of these slamobranchs in the fish market. The objective is to detect protected species for sale, something that is not common, but can happen, usually due to ignorance and because of how difficult it is to distinguish each family of sharks and rays.

The results of the work, financed by Marilles, will allow us to compare if there have been important changes during the last decade. And it is that the latest data on this matter were collected in a similar study carried out in 2009. After this year, more restrictive regulations have been established with the fishing of sharks and rays. Hence the importance of this study, which will determine if there have been significant changes in relation to the presence of these animals in the fish market.

According to the researchers, sharks and rays have biological traits that make them very vulnerable to overfishing. In fact, 39 of the 73 species present in the Mediterranean are threatened. In the Balearic Islands, of the 58 species mentioned, 28 are threatened and two are considered extinct.

Can sharks be caught?

“Yes. There are certain protected species. First, some of them were protected in marine reserves ”, explains Gabriel Morey, director of this study. “Then there is a regulation that protects other species such as pelagics (white, peregrine, mantas, thresher shark, hammerhead …), all of which are present in the Balearic Islands. They cannot be captured, but the rest can. For example, to say the most common and that have commercial and / or gastronomic value, deep-sea sharks, small ones. It would be the thighs, the dogfish, the ‘moixin’, etc. ”, Morey points out. Also “there is a variety of rays, around a dozen, which are caught and sold in the Balearic Islands.”

The researchers expect certain changes in the study that is now being carried out because “in 2009 there were still no protected species in the fish market. Most were protected in 2012. That is why we expect a change in the composition of the commercialized catch. You can find some, because they are difficult to identify species, but in the same fish market and with our help they are removed. The truth is that there are few cases ”, Morey advances.

Knowing the volume of catches of these species is essential to assess the impact of fishing on populations and thus be able to manage them properly. However, it is known that official statistics are inaccurate due to poor identification of the landed species. Through weekly sampling for 12 months, the study will characterize the catches of sharks and rays landed in the Palma fish market, where about 70% of the Balearic catches are traded. 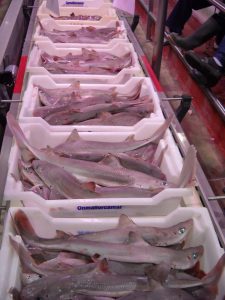 As in 2009, the study is directed by Gabriel Morey, a biologist member of the IUCN Shark Specialists Group and vice president of Save the Med. On this occasion, it will include the participation of Olga Reñones and Francesc Verger, who have extensive experience in studying the effects of fishing on fish populations in the Balearic Islands.

OPMallorcamar, the managing body of the Palma fish market, has shown its total willingness to collaborate with the study and facilitate the work of researchers. Pedro Mercant, president of OPMallorcamar, assures that “as has been recognized, the Palma fish market is an example in the identification of the species traded. Even so, our goal is to improve and for this we rely on studies like this one. Furthermore, we pay special attention to preventing the capture and commercialization of protected species ”.

For his part, Aniol Esteban, director of the Marilles Foundation, explains that “a sea with an abundance of sharks and rays is a sea in a good state of conservation. The number of sharks in the Balearic Sea has decreased dramatically as in the rest of the Mediterranean. Recovering these species is a priority for our foundation ”.